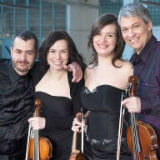 March 2015 – The Škampa Quartet played the première of my First String Quartet ‘Moravian Souls’ on March 17 in highly appropriate surroundings: the Church of the Moravian Brethren in Zeist.

It was a joy to work on the new piece (read more about it here) and I am looking forward to its first performance by the renowned Škampa Quartet.
The Škampa Quartet is among the very finest of an outstanding group of current Czech string quartets that has represented their country in major concert halls around the world for twenty five years.
Through their mentors, the legendary Smetana Quartet, they trace their roots to the earliest quartets – such as the Bohemian Quartet – in a land described in the 18th century as the Conservatoire of Europe and that remains, to this day, the very cradle of European chamber music.
Their engagements have included collaboration with many fine internationally recognised artists including Melvyn Tan, Itamar Golan, Josef Suk, Michael Collins, Kathryn Stott and Janine Jansen among many others.
You will understand that I am thrilled.
The title ‘Moravian Souls’ refers not to Moravian folk music. The quartet has made a name in that, with their project ‘Janacek and his Moravian Roots’ – and the collaboration with singer Iva Bittova. My starting point was the musical legacy of the Bohemian en Moravian Brethren, now known as the Moravian Church (‘Hernhutters’). The background of the piece is described here

Other performances will be in Enschede (March 19th) and Ede (March 22nd) (the schedule is here. Broadcasting company MAX will record the Ede concert to be broadcast during the Radio 4 Evening Concert on Wednesday March 25th 2015. 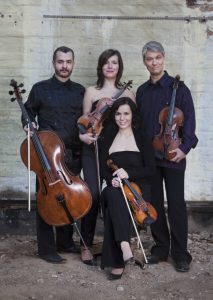