august 2009 – I was featured Dutch composer at the Atlantic Chamber Music Festival – and witnessed an impressive first performance of my new (and first) piano trio.

In august 2009, I had the honour to be guest artist at the Atlantic Chamber Music Festival, related to the International Music Course and centered around the Atlantic Trio. In a program of composers mostly dead and German, I was the only Dutch composer (besides being the only living one). The reason: they played the first performance of the new piano trio that I wrote for them, that is, of its first, second and last movements – I was then still working on the third, a scherzo. Together with Vegard Nilsen, violinist of the trio and artistic director of the festival, I picked two beautiful pieces to open and conclude this festive program: Mozart’s quartet in F, KV 370 for oboe, violin, viola and cello and Brahm’s quintet in f, op. 34. It was an absolute joy to hear the beautiful playing of oboist Luk Nielandt and I was also much impressed by violinist Otto Derolez and cellist Olsi Leka. The Atlantic Trio played my new work marvelously and made the Brahms quintet, together with and violinist Andres Czifra and violist Marc Tooten, the listening adventure that Brahms must have had in mind. 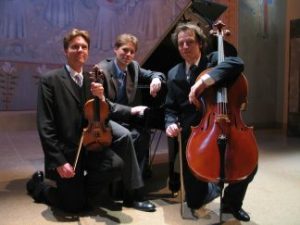 It is a rare feeling to hear your music played for the first time with such affinity of spirit. I already thoroughly enjoyed rehearsing with the Atlantic Trio and discussing the music. But their performance was that rare event – a first performance so much in tune with the idea of the music that even I as a composer could not fail to be deeply moved. If there had not been this enthusiastic audience, I would still be absolutely satisfied to have heard our minds meet in sound so perfectly.
Thank you, Bas Verheijden, Vegard Nilsen and Ansfried Plat! I am looking forward to your performances of the complete work.