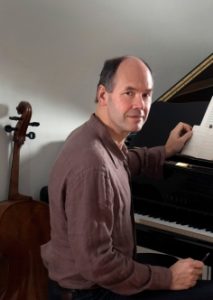 Willem Wander van Nieuwkerk is a composer and teacher of New Music at the Amsterdam Conservatory. As a young pianist he played improvised and modern music. He made his first larger works together with musicians from various styles, such as punk, reggae and symphonic rock. His interest in well-known, lyrical musical genres later expanded to the European classical tradition. This interest in historical and contemporary cultural heritage is not only reflected in his lyrical musical style, but also in the subjects that fascinate him. For instance, he wrote works commissioned by the Upper House of the States General in honour of the National Commemoration of the Peace of Münster. Commissioned by the Prague Bennewitz Quartet, he wrote the Super Suite, based on liturgical melodies and with traces of tango and blues. His string quartet Moravian Souls for the Czech Skampa Quartet musically follows the trail of the Bohemian Hussites from Central Europe to America and Africa, his violin sonata Deep River explores the nineteenth-century roots of gospel.

He recently wrote the Introitus, Sanctus and In Paradisum for the Utrecht Requiem in 2017, 2018 and 2021, sung by the Nederlands Kamerkoor, Kamerkoor Next and soloists.

The Stichting Klassiek op Zuid commissioned him in 2018 for a Christmas Quartet, a string quartet (to be played by good amateurs) based on old European Christmas carols. A private commission led to the Seven Divine Meditations for mixed choir, on texts by John Donne and melodically based on the Geneva Psalms.

His last major work is the suite Songs of War & Peace, premiered in 2020 by the Ruysdael Quartet and recorder player Peter Holtslag, based on folk music from the Thirty Years’ War. In 2021, his Scenes from our Fate, a song about the corona crisis on texts by Ester Naomi Perquin, was released for the CD Treur Nederland! by Camerata Trajectina. For pianist Thomas Beijer he is working on To the Black Maiden, a trio of piano pieces based on melodies from the Catalan Llibre Vermell.

Van Nieuwkerk taught Music History New Music, Aesthetics and Chamber Music at the Amsterdam Conservatory for over thirty years. He published on aesthetics and music history in, among others, the Dutch Journal of Music Theory. He is happily married and has two children, Yuri and Mascha. 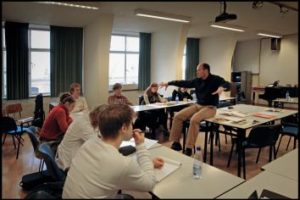 More to read, listen and/or watch: