Below some thoughts on music and composition. The essays have been published in some form. Some stray thoughts, often of a more personal nature, can be found as Musings.

But that is no real music! Right.

I think the developments in sonic arts show what the boundaries of real music might be. This text deals with the radio play fiction in sonic art, the transcendence of pitch and music’s diffuse intentionality. It is an adapted version of a chapter in one of those rare publications, a Dutch book on the philosophy of music (called, in English translation: What is the Language of Music?)… Though inspired by Roger Scruton, I depart from his thinking by wielding J.J. Gibson’s theory of affordances to create a more radical basis for ‘pure music’…  more

Boulez in the Fifties: method, Marteau, and Mallarmé’s multiple meanings

A short critical introduction to ideas that underlie Pierre Boulez’s post-serial methods and their relationship to his controversial contemporary John Cage and his admired 19th-century literary predecessor Stéphane Mallarmé.. 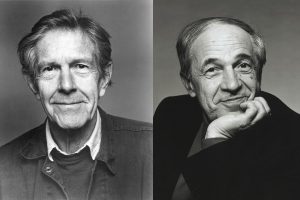 To Appear
The debate between Ancient Moderns and Postmoderns turns up now and then in Holland, even in the usually excessively moderate discussion section of the Dutch Journal for Music Theory. There, Dutch composer John Borstlap clearly fell out of line with most of his more influential colleagues when he argued that new music often is a heartless abnormality… John is one of the few classicists by conviction in the Dutch musical landscape. He wrote the book about it, straight away in English. In the ‘progressive’ Netherlands, his ideas meet with an (almost literal) deadly silence. Do listen to his works.

No book may have been more influential on Dutch thought about modern music than Dutch composer Ton de Leeuw’s book Music of the Twentieth Century – A Study of Its Elements and Structure. It has been translated in German, and recently also in English
by Amsterdam University Press – almost thirty years after it’s last Dutch edition. Someone must have been quite sure that it still has a wider relevance to understanding our previous century. And the book is indeed remarkable….

A Classicist in Denims

To Appear
Isn’t classicism dead and buried? Or still practised but under new pretexts? Pressing issues – I think. And a good reason for me to very diligently read Robert Adlington’s book about Louis Andriessen: De Staat, and review it for The Dutch Journal of Music Theory, 10 no. 3.