For Brisk Recorder Quartet at its 20th anniversary. First performance in Paris, September 23 2006, at the Institut Neérlandais.

Brisk celebrated its 20th anniversary in 2006.
Six Dutch composers wrote a one-minute present. This is mine. It is a caccia of sorts, a polyphonic excercise in wayward flying by four little putti who very fleetingly touch upon the well known question: how many angels can dance on a pin’s head , or rather, on the tip of a recorder player’s tongue?

It seemed appropriate for a jubilant 4-tet to flutter during 44 bars in a tempo of quarternote 176.
Mind you, I am no scholastic whatsoever, as I hope will become quit clear if you listen to the recording below.

The little piece is featured on the cd Vintage Brisk – Contemporary music for recorder quartet, released by Globe Records.

The Flanders Recorder Quartet has recorded it on their cd Encore.

The sheet music has (finally!) been published in the Brisk Recorder Quartet Recorder Series, and very neatly so, by Ascolta Music Publishing, Houten, The Netherlands. 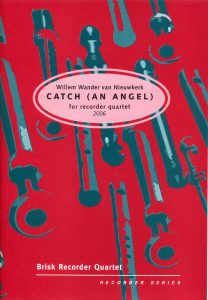